THIS TRANSPARENCY PORTAL MAKES INFORMATION ON THE ACTIVITY OF ETSA GLOBAL LOGISTICS (ETSA) AVAILABLE TO ALL STAKEHOLDERS.

ETSA GLOBAL LOGISTICS S.A.U.,S.M.E. (hereinafter the Company or ETSA) was incorporated as a public limited company for an indefinite period of time on 23 April 1996. Its registered office is located at Ctra. Salamanca-Vitigudino, Km. 0.7. 37008 Salamanca.

The sole shareholder of the Company is ENUSA INDUSTRIAS AVANZADAS, S.A.,S.M.E., and therefore, by virtue of the provisions of Royal Legislative Decree 1/2010, of 2 July, approving the consolidated text of the Spanish Corporations Act, the Company is a sole proprietorship. The Company belongs to the SEPI Group, which is headed by the Sociedad Estatal de Participaciones Industriales as the ultimate parent company.

The direct parent company of the Company is Enusa Industrias Avanzadas, S.A., S.M.E., which has its registered office and tax domicile in Madrid.

The mission of ETSA GLOBAL LOGISTICS S.A.U., S.M.E. is to provide multimodal and global transport and logistics services for nuclear and radioactive goods, as well as other hazardous and complex goods, in strict compliance with the applicable national and international regulations through an internal quality management and environmental protection system.

This section refers to the regulations that determine the legal system and status of the Company, as well as those that govern its activities, the procurement of supplies, goods and services and those that ensure good governance and the transparency of management. 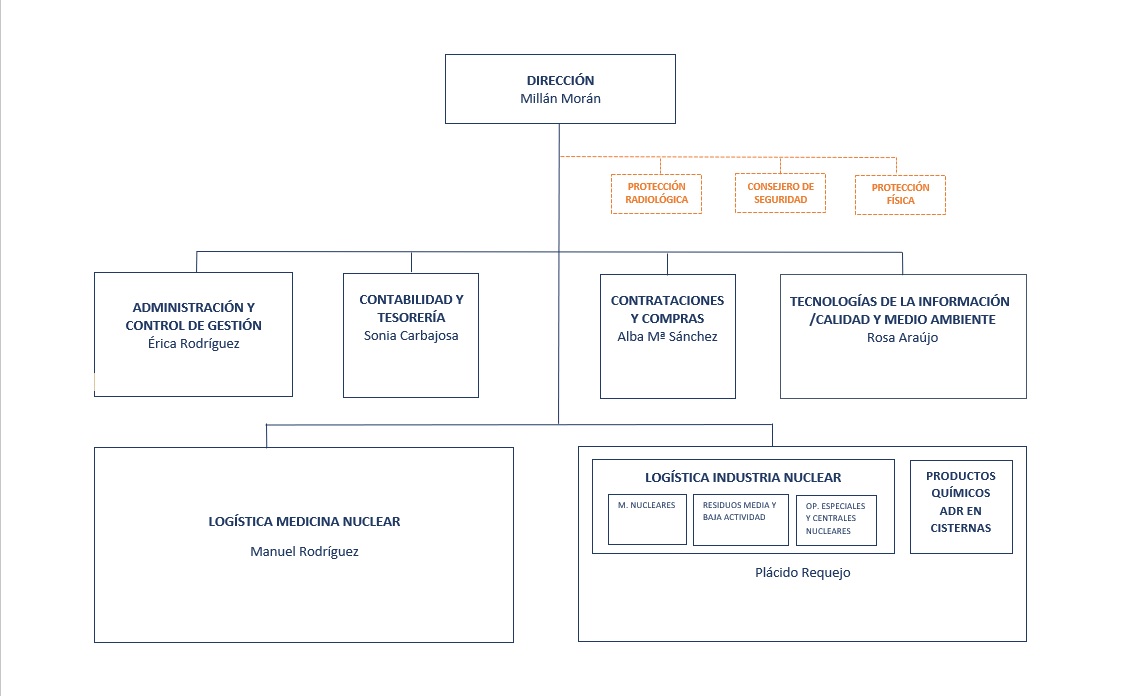 This section provides information on management actions with financial or budgetary implications.

The contents of Act 19/2013, of 9 December, on transparency, access to public information and good governance regarding ETSA GLOBAL LOGISTICS S.A.U., S.M.E. contracts can be viewed in the Contractor Profile: Public Sector Procurement Platform.

In accordance with Act 5/2006, of 10 April, on the regulation of conflicts of interest of members of the Government and Senior Officials of the Civil Service, the only senior official, who happens to be the General Manager of the company, is the Chairman of the Board of Directors.

Mr. Mariano Moreno Pavón does not receive attendance allowances or other remuneration or expenses in connection with his position as Chairman of ETSA GLOBAL LOGISTICS S.A.U., S.M.E.

During the previous year there were no indemnities for senior management or the General Manager.

The information on the compatibility resolutions may be viewed on the Transparency Portal of the Central Government.

Access to information on the code of conduct of the ENUSA Group.

The accessible information provided for in Act 19/2013 of 9 December, on transparency, access to public information and good governance, is published on the “Transparency Portal” of our website. For any additional information (Art. 21.3), ETSA GLOBAL LOGISTICS S.A.U.,S.M.E. will answer all relevant questions via email at transparencia@etsa.es

In order to ensure the proper functioning of the mailbox, it is essential to provide the following information along with the query:

Our strategy is based on continuous improvement and the search for technical efficiency.